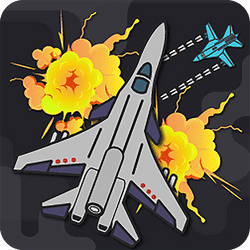 It's time to battle the enemies through air attack to enforce the Power of the Supreme! Numerous aircraft, spaceships to battle with, knock them out with gunfire, missiles from your fighter jet! In the short run and gun. The Sky gets filled with smokes of gunfire and high-tech missiles resulting in a devastating aero strike. The surroundings get more batlesome as you progress through the game showcasing the real feel of the air force. Arcade Games Free brings you the 1945 Air Force Game; this game has everything needed for an adrenaline-pumping experience with your favorite retro airplane shooting down any enemies who are left standing! It features multiple missions worth replaying again and again and different planes to pilot right into battle at any time during gameplay!. With high-quality graphics, authentic sound effects & addictive music, it will become part of your daily routine (or maybe not!). It's 1945, and World War II is over. But, a new war is just